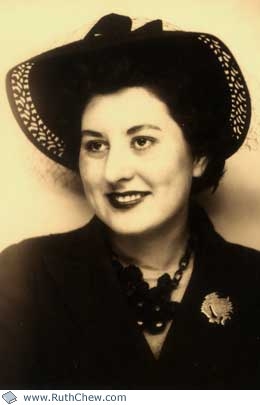 Ruth was born in Minneapolis, Minnesota on April 8, 1920. She moved to Washington, D.C., while she was quite young and attended school there starting in a one-room school house. She graduated from Western High School in 1936 and studied at the Corcoran Art School for four years.

As a child she was determined to be an artist and drew constantly. She believed that the only reason she passed high school biology was because of the drawings she made of the specimens. She hated math and science and never believed that two plus two equaled four. She believed in magic.

One of Ruth's favorite authors as a child was E. Nesbit, who wrote fantasy and time travel books. Several of E. Nesbit's books were about a family of five children. Ruth was determined to have five children. In 1948 after marrying Aaron Silver, an attorney, she moved to Brooklyn from Manhattan, where she had gone to pursue a career as a fashion artist, and followed through on her plan to have five children. Within a decade David, Eve, George, Anne, and Helen were born.

After her second child, Eve, was born, Ruth found it too difficult to continue working and was a housewife until after her last child was born. In 1953, she moved into the row house in Brooklyn, which is the setting for many of her books. Ruth and Aaron were the third owners of the home, which was built in 1911. The two previous owners had also had five children. Ruth loved the house and garden. The house appears in the illustrations for some of the books.

As her children were growing up, Ruth tried to return to being a fashion artist, but found that photographs had largely replaced drawings in advertisements for clothing. She then sought work as a children's book illustrator, which had really been her dream. Although she got a couple of jobs illustrating books, she did not get much work. She decided to try writing a book of her own, so that she could illustrate it. The result was The Wednesday Witch.

The Wednesday Witch was rejected by 10 publishers, before Beatrice de Regnier, an author and editor with Scholastic Books, helped Ruth revise it for publication. The book was based on stories that Ruth told her youngest daughter, Helen. The witch in the story rode on an old canister vacuum cleaner like the one she had used for many years.

Ruth believed strongly that you should write what you know about. That may sound strange for a writer of fantasies, but the locations in which the stories are set were well known to her. Many of the books essentially took the reader to the front door of her home in Brooklyn. The house was near Prospect Park, which plays a key role in some of the books. In other books, she includes the names of the streets in the neighborhood. Ruth loved Brooklyn and in almost all of the books, Brooklyn is mentioned in the first couple of pages.

Ruth continued to live in her beloved home in Brooklyn and take art classes at the Art Students League until early 2001, when her children decided that she needed assistance. She did not want to leave Brooklyn, but could not continue to live alone and none of her children lived nearby. Since 2001, she has lived in the Bay Area of northern California near her oldest daughter. Ruth Chew Silver passed away on May 13, 2010 at the age of 90. Her husband, Aaron Silver, died on May 10, 1993. She is survived by her five children, eight grandchildren, and her brother, Geoffrey Chew.

Generations of children around the world learned to read from Ruth Chew's 29 fantasy books about children having adventures with witches, wizards, magic and time travel set in true-to-life locations mostly in Brooklyn. Ruth Chew, who considered herself to an eleven year-old trapped in an adult's body, aimed her gentle adventures at eight to eleven year olds.

Her books were published in English, primarily by Scholastic Books, from 1969 to 1996. Spanish editions of many of the books appeared in 1986 and 1987. The books were also translated into Finnish and Taiwanese. Most recently nine were translated into Japanese. The Japanese translator discovered the books while she was living in Saudi Arabia, where her husband was working. She taught her oldest daughter to read English with Ruth's books before her daughter learned to read Japanese. After her daughters were grown, she convinced a Japanese publisher to issue to translations of nine of the books that had witches. 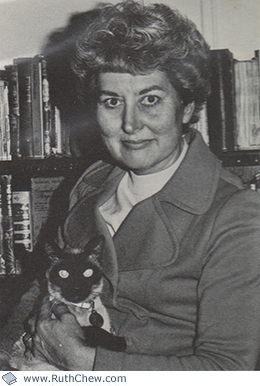 Ruth Chew is the author of several children's books which she has also illustrated. She studied at the Corcoran School of Art in Washington, D.C. She decided to write a book about a witch because her youngest daughter, Helen, always begged her mother to hell her witch stories. Ruth Chew is the mother of five children and lives in New York City. 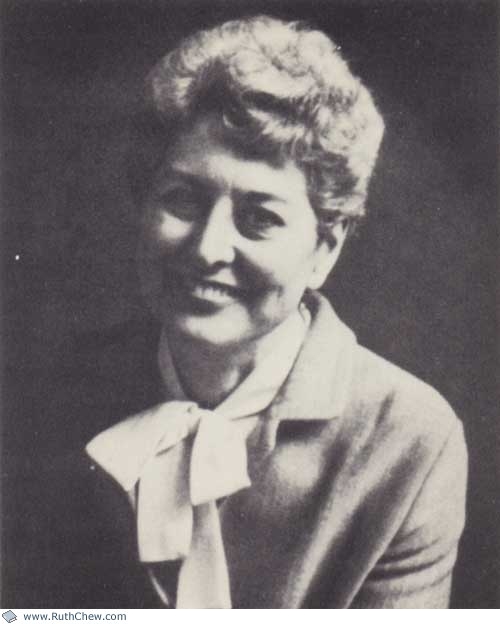 Ruth Chew was born in Minneapolis and grew up in Washington, D.C., where she studied at the Corcoran school of Art. She worked as a fashion artist in Washington, Baltimore, and New York before she married Aaron Silver, a lawyer, and moved to Brooklyn, where she and her husband still reside.

While raising five children, Ruth Chew began to tell stories to them. Her first published book was entitled The Wednesday Witch, and this was soon followed by many more, mostly about magic. Some of the stories are set in the Poconos, where the family spent summer vacations.

In addition to her own work, Ruth Chew has illustrated books by other authors. She studies at the Art Students League under John Groth and Robert Shore and considers herself primarily an artist. "I'm not really a writer at all," she keeps saying modestly—but the children who have bought millions of copies of her books don't believe her.

Ruth Chew, author and illustrator of many popular children's books, including Witch in the House, The Witch's Buttons, What the Witch Left, lives in New York with her husband and five children.

She attended the Corcoran School of Art in Washington DC and then worked as a fashion artist for department stores, newspapers, and advertising agencies.

Inspired by her smallest daughter, she turned to writing and illustrating stories for children, and she still credits her tales' most colorful touches to her young assistant.

Ruth Chew is the author of a number of popular books for young readers, including Secondhand Magic and The Wednesday Witch. She was born in Minneapolis and studied art at the Corcoran School of Art, and is currently studying at the Art Students League. The mother of five children and the grandmother of four, she lives in Brooklyn, New York, with her husband, Aaron B. Z. Silver.

From Do-it-yourself Magic, Earthstar Magic, and
The Witch's Garden (1987) 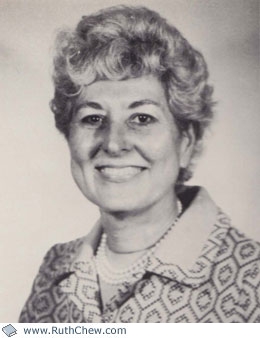 Ruth Chew is the author and illustrator of many popular children's books including Witch in the House, The Witch's Buttons, What the Witch Left, The Would-Be Witch and The Magic Cave. She attributes the appeal of her books to the fact that she writes the kind of stories she would have liked when she was a child.

Born in Minneapolis, Ms. Chew grew up in Washington, D.C. where she attended the Corcoran School of Art. She has worked as a fashion artist for department stores, newspapers and advertising agencies, and continues to study art under John Groth and Robert Shore at the Art Students League of New York. The mother of five (three daughters and two sons) and grandmother of two (both boys), Ms. Chew and her husband, Aaron B. Z. Silver, a lawyer, make their home in Brooklyn, New York.

Ruth Chew was born in Minneapolis and studied at the Corcoran College of Art and Design in Washington, D.C. While working as a fashion artist, she started writing stories about witches for the youngest of her five children. The first of these, The Wednesday Witch, was a big hit, and her new career was born. Ruth Chew went on to write twenty-nine tales of magic and fantasy that have enchanted generations of readers. 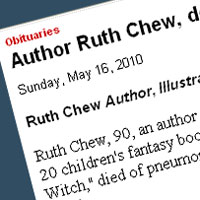 The Washington Post published an obituary on Sunday, May 16. 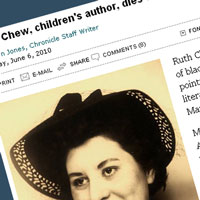 The San Francisco Chronicle published an obituary on Sunday, June 6.