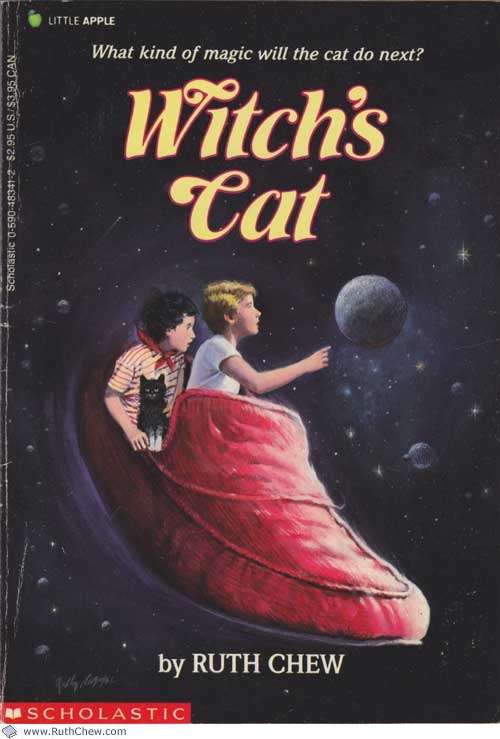 Written and illustrated by Ruth Chew.
First published in 1994 by Scholastic Inc.

Holly was sure the window was too small for them to go through, but it became bigger and bigger. The windowsill was as wide as a highway by the time they sailed over it into the open air. Everything outdoors was enormous, too. "Matt," Holly said. "How did everything become so big so fast?" "I think we became small," her brother told her. You never know what's going to happen when you meet a witch's cat!

Holly and Matthew are staying with their grandparents, who have books and an herb garden. Their new cat Albert asks the children to help him with some herbs and books. Matthew accidentally steps on some herbs the cat has gathered, smearing them together on the bottom of his slipper. The magic paste makes his slipper grow big enough to sit in! The children and Albert sit in the slipper and Albert asks it to take them back in time to Nell Fisher. It shrinks and takes them flying up into the sky and outer space. When they return to earth they meet Nell Fisher, a woman whose neighbors mistreated her and Albert and tried to drown them because they suspected her of being a witch. Nell changes her appearance; Albert says that because she saw her new, beautiful reflection and cried, she cannot be a witch anymore. The children and Nell are found by the local warlike earl and Nell is taken to his castle, where Nell pretends to be Lady Eleanor of Fiswell. The children and Albert meet a woman named Meg and stay with her overnight, send the slipper to help nell, then go to the castle looking for Nell. When they find her, they all escape in the slipper, which takes Holly and Matthew home. Albert returns in the slipper and explains that Nell got a job at the circus.

Holly and Matthew (sister and brother), Albert (the cat)