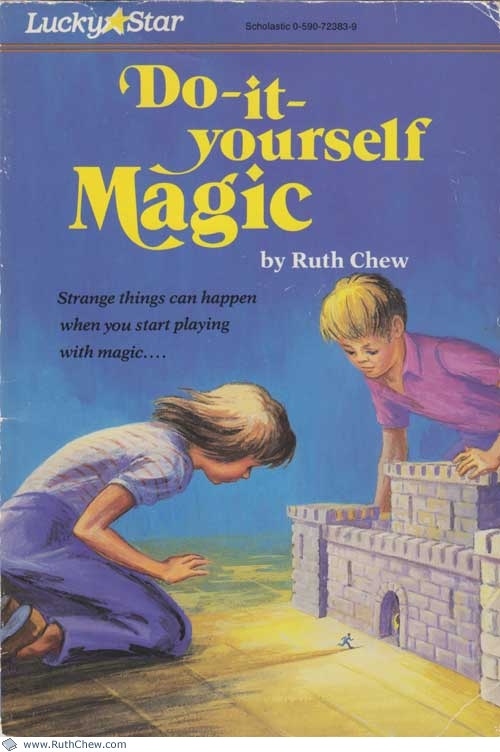 Written and illustrated by Ruth Chew.
First published in 1987 by Scholastic Inc.

Rachel lay on her stomach and looked into the castle. "I don't see Chester anywhere." "If Chester is running around loose, he might get stepped on," Scott said. "He's so tiny, I don't want anything to happen to him, Rachel." Rachel dug far down in her jeans pocket and pulled out the magic hammer. She began to tap the castle wall. "Look," Scott whispered, "the castle is getting bigger!"

Rachel and Scott buy a discount model kit and discover that it contains a hammer that turns invisible and changes the size of things. Scott builds a car, and Rachel shrinks him so he can drive it. He drives the car outside by accident, and she makes it life-size when she sees the toy almost get run over by a truck. A woman sees the car and tells the police, but Rachel shrinks it again. When they go back inside, they find a man trying to steal their TV. Rachel shrinks him. They feed him dinner and let him drive the toy car. They build a castle and Chester goes in. They make the castle bigger and find themselves in another world. They are invited to perform for the earl, the countess, and Lady Isabel at a banquet at the castle. Chester plays the mouth organ and tells how his friend Marty told him to go in the house and steal something, and how he was magically captured. They all sleep in the castle. Rachel makes friends with Lady Isabel at the water fountain, and travels with her and many others to a fair at Mansfield. Lady Isabel tells Rachel that she doesn't like being told what to do just because she's female, and warns Rachel to escape because some people think she's a witch. But Rachel has lost the magic hammer! Chester tells Scott and Rachel that he wants to stay at the castle and be a minstrel, and gives Rachel the magic hammer, which he had found by accident and put in his pocket. They use it to shrink the castle and return home.

For my grandson, Jonathan Charles Silver.