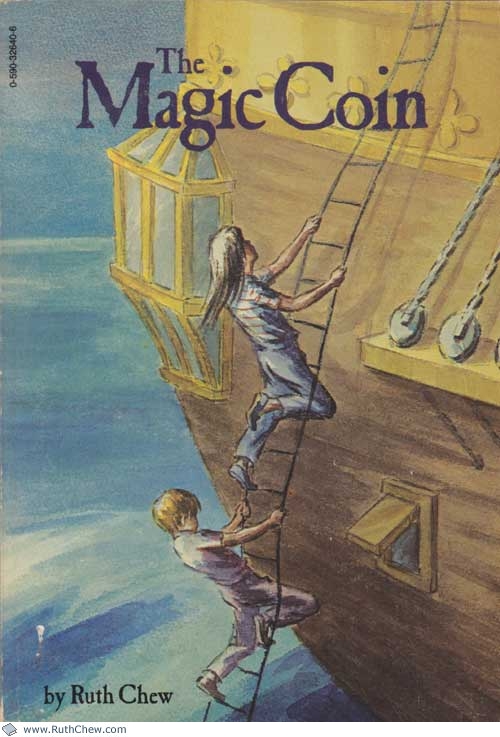 Written and illustrated by Ruth Chew.
First published in 1983 by Scholastic Book Services.

"I wish we were back in the days of the treasure ships!" Christopher said. Suddenly the little silver boat began to spin around as if it were caught in a whirlpool. Christopher and Meredith got down on the bottom of the boat. They held onto each other to keep from being thrown out into the water. The boat turned faster and faster…

Meredith and Christopher find themselves on a strange faraway island. The magic coin took them there, but now it will not take them home again!

Meredith tries to spend a coin from the newspaper man, but the shopkeeper won't accept it because it's not a quarter. Walking home, they notice the face on the coin smiling. When it starts raining, they wish for an umbrella and the coin becomes one! The coin helps them with their homework and they use it to shrink and fly to school, where the man on the coin (Juan Pablo) supplies milk at lunch. At Prospect Park, mean boys take the coin from Meredith and drop it in the lake. She finds it, and they wish to be in a boat at the time of treasure ships. They land at a tropical island and eat a coconut and go swimming. That night on the island in the woods, they discover two men, Jonathan and Matt, who share food and water with them and let them sleep in hammocks. The next day they meet Jeremy Talbot, who works for Captain Bardfield of a ship called The Red Goose. Meredith and Christopher agree to go on the ship, too, because the ship is sailing to New York. When captain decides to attach a Spanish treasure ship, the Cadiz, the children wish Jem back to Matt and Jonathan and themselves back to Prospect Park.

To my newphew Jean-François Foucar Chew.

The Magic Coin at Amazon

The Magic Coin at Abebooks