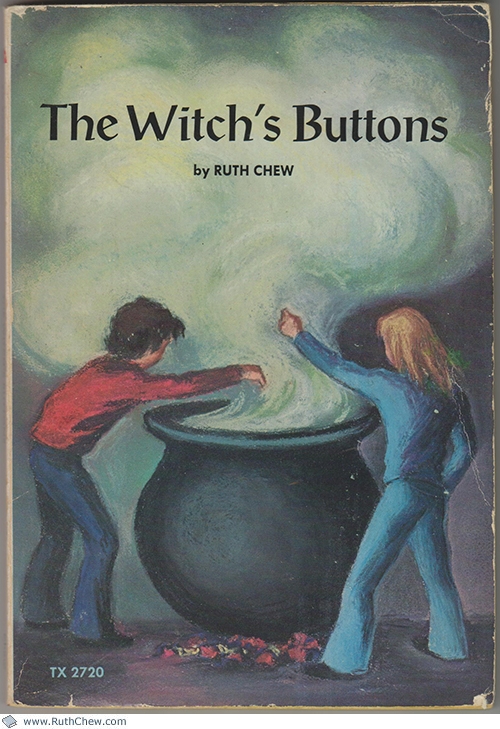 Written and illustrated by Ruth Chew.
First published in 1974 by Scholastic Book Services.

Sandy put her hand into her pocket and felt the button. It seemed to twist in her hand. She pulled the button out and looked at it. It was shaped like a tiny man, and there was a grin on his face. Sandy almost dropped the button. "Janet," she whispered, "it's alive!"

A talking button in the shape of a man leads two young girls into a series of magical adventures.

Sandy James loses a coat button. When her friend Janet Kramer gives her a bone button shaped like a pilgrim man from her grandmother's button bag, she finds out that the button is really a man named Silas, who has been turned into a button by a witch named Betsy. When a suspicious cat steals the button, Sandy and Janet follow it to an old house, where they see the witch change Silas back into a person. They eat some some apples stolen from the witch, and accidentally turn invisible. After Sandy plays tricks on her classmate Jerry, they both become visible using some of Betsy's witch's brew. Silas, angry with Betsy, steals most of her button collection and turns Betsy into a button, selling her to Sandy's father. Sandy's baby sister Lisa likes Betsy as a button, but Betsy wants to be changed back, so Sandy and Janet use some extra potion on her, and Betsy makes a replacement button for Lisa. The next day, Sandy and Lisa discover that the witch's house has burned down, but in the chimney they find a brass box covered in a leafy feathery pattern, containing the best buttons from Betsy's collection: a faceted black button, a shiny red button, and a pearly white button. They find that the black one grants wishes, the white one is a tiny flying ship, and the red one answers questions. Witch Betsy shows up and takes the buttons away again, letting them keep the chest and presenting them with a mysterious button of their own.

The Witch's Buttons at Amazon

The Witch's Buttons at Abebooks