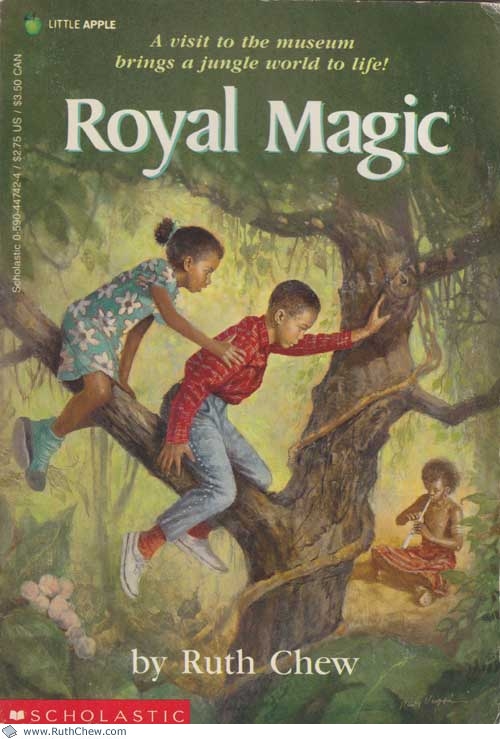 Written and illustrated by Ruth Chew.
First published in 1991 by Scholastic Inc.

"Everything seems so real," Cindy said. "I can feel a warm breeze," said Jack. "Is it coming from behind us?" "Jack, look, the little chimp is moving, and we're in a tree in the middle of the jungle!" There's magic going on and Cindy and Jack are into a real jungle adventure in a time long ago. Soon they will meet a man with a flute who knows and important royal secret.

While visiting a museum, Cindy and Jack magically enter a real jungle adventure.

When Jack and Cindy visit the natural history museum, they suddenly find themselves inside a living diorama. They cross paths with a two royal hunters and the royal jester, who befriends them. The strangers believe the children are royalty and escort them to a town where they learn about the local customs and spend the night. The next day, they arrive at the city where the ruler lives. Although he is ailing, he welcomes them and asks them whether it is customary to kill twins at birth in their country. The ruler's wife says the diviners want to perform a human sacrifice to heal him, but he objects, saying that God does not like human sacrifice. If he dies, his servants are all supposed to be killed anyway, though. He wants to consult his wise mother, but by custom is not allowed to see her anymore. The children secretly accept a carving of the trickster Esu from the ruler's wife and agree to pass it to the Queen Mother. The Queen Mother says it is a sign that a secret plan is being carried out and asks them not to spoil the secret if they notice something strange. When they return to the ruler's palace, the ailing ruler and the healthy jester have changed places! They pretend not to notice. The Queen Mother performs a magic spell that returns the children to the diorama in the museum.

Jack and Cindy (brother and sister); Atuke (royal jester), His Majesty the Oba of Edo, his head wife the Enahan, and his mother the Queen Mother

For my grandson, Zachariah Jared Silver