The Hidden Cave
(aka The Magic Cave) 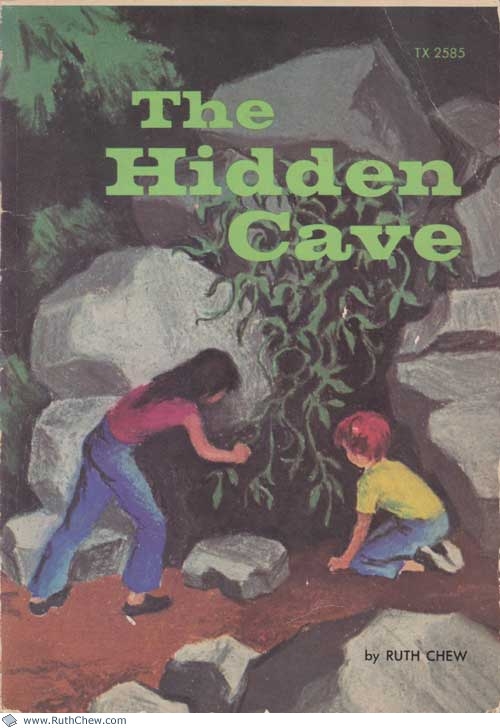 The fluffy tip of Freckles' tail stuck out of a tangle of vines. A moment later the tail disappeared. Tom climbed the slippery bank to the place where the dog had been. He pushed aside the vines that hung down from a rocky ledge. "Al!" Tom yelled to his sister. "Guess what I found!" What Tom found led to the hidden cave… the magic tunnel… and the old magician!

When lightning splits an old oak tree, a brother and sister discover Merlin who has been sleeping inside the tree for many centuries.

Tom and Alice are exploring a drainage pipe in Prospect Park when it starts to rain. Lightning splits open a tree to reveal an old man with really long hair who says his name is Merlin. Tom and Alice suggest that he take shelter in the pipe and return home to find him some scissors to cut his hair and something blue and gold to wear. Alice accidentally dyes her white bedspread blue, then decides to add gold stars and curtain ties and give it to Merlin to wear. They take him some food and the robe and help him cut his hair. They have to show him how to eat a banana. The next day, they find him on a swing he made with his hair, and convince him to eat corn flakes. The three of them follow the tunnel, which magically leads to the library, where Merlin reads some books to try to remember how to do magic. Then Merlin pets a lion in the zoo. He disarms some boys who threaten them with knives by using magic to make the knives too hot to hold. Then he says he needs herbs to do proper magic, and the three take the tunnel again, magically arriving at the botanic garden. Merlin collects some leaves and twigs, but gives them to Alice because he doesn't have a pocket. Back home, Tom throws some of the herbs into the wading pool he's trying to set up, and the pool sets itself up. When Alice and tom get in, it becomes an ocean with an island. Merlin uses the rest of the herbs to set up a cave house in the pipe in the park, but still appreciates it when Alice brings him Fig Newton cookies to eat. Meanwhile, Tom has gotten himself kidnapepd by pirates in the magic wading pool. They escape and rescue a nice pirate, who gives them each a gold coin. Merlin uses more herbs to fix the pool so that Alice and Tom can swim in it safely. However, the bad magic of the pool makes their father want to dig up the yard looking for more gold coins. Merlin finds the Eye of Horus in the Brooklyn Museum and uses it to give Tom and Alice the ability to stop their father and to go back to King Arthur's time. Tom and Alice enjoy the pool for the rest of the summer.

The Hidden Cave at Amazon

The Hidden Cave at Abebooks