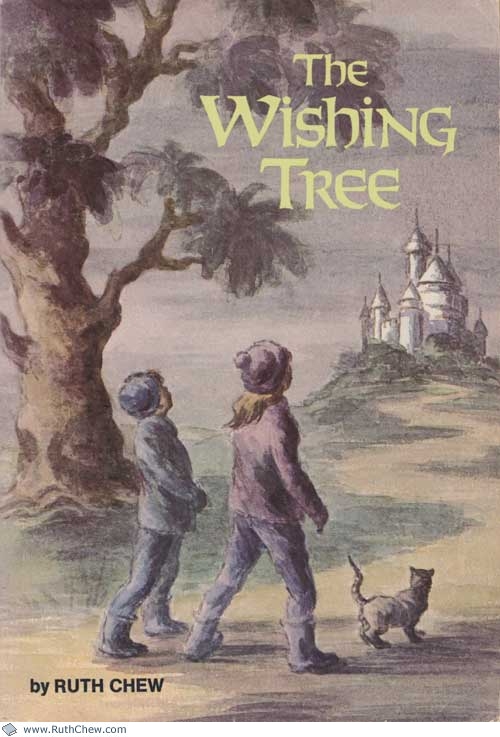 Written and illustrated by Ruth Chew.
First published in 1980 by Scholastic Book Services.

What is that CREEPY cat up to? Who is that WEIRD woman in the park? And that tree! Peggy and Brian are sure there is something SPOOKY about it. And they are right!

A bird and cat that talk and a special tree in a nearby park involve a brother and sister in some magical adventures.

One evening in November, a talking cat named Puss leaves the company of a woman in Prospect Park near a mysterious-looking beech tree and a mockingbird and follows Brian and Peggy home. When they try to return the cat to the woman the next day, they lose track of him. The mockingbird tells them to go inside the tree to find the cat. They get sucked in through a knot hole and have to dig their way out. When they do, they find the cat and discover that it is spring and go swimming in a pool with a waterfall, where they find a box that's rusted shut. They see a castle in the distance, and the cat promises to take them to visit later. They go back into the tree and emerge in Prospect Park. Brian and Peggy go back to the park to try to get the magic tree to open the box. After they see the woman having a magic picnic on a tablecloth in the snow, the mockingbird helps them open the box, which contains a golden key that opens any lock, and introduces them to the woman, whose name is Annie. She is homeless. The cat wakes Brian and Peggy during the night to go back to the castle, where the cat searches for something until he is caught by a giant named Fred, who turns out to be friendly. He has a hard time feeding himself as a giant, especially since Puss lent his magic tablecloth to Annie. Fred lets Brian and Peggy eat cherries from the trees in his garden because they are too small for him to eat. The mockingbird arrives asking for help for Annie. They all go back through the tree, which returns Fred to his proper size, and find that Annie has hurt her ankle. She decides to go back to Fred's castle so they can both use the tablecloth. Puss goes home with Brian and Peggy.

The Wishing Tree at Amazon

The Wishing Tree at Abebooks