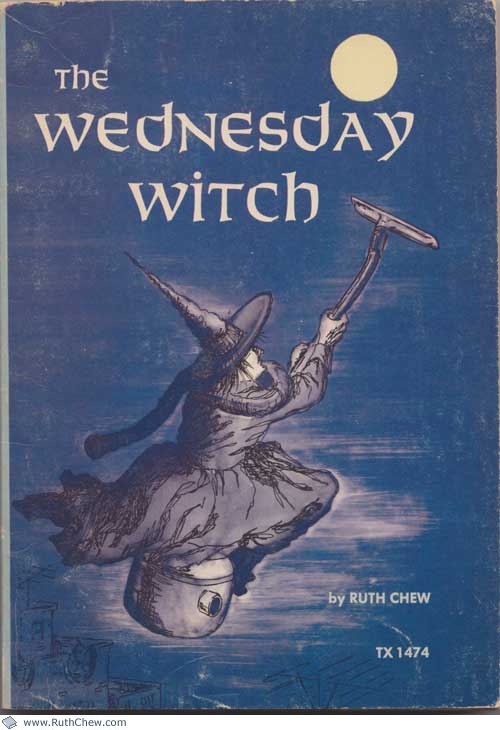 Written and illustrated by Ruth Chew.
First published in 1969 by Scholastic Book Services.

Mary Jane's mother has told her not to let any strangers in the house while she's away. But there's someone outside banging on the door. When Mary Jane looks through the peep hole, she sees a short, fat woman wearing a long black dress and a tall pointed hat. Mary Jane thinks she looks just like a witch. The woman outside IS a witch, and Mary Jane is about to meet her face to face!

The arrival of a witch who travels by magic vacuum cleaner is only the beginning of Mary Jane's strange adventures.

The smell of Mary Jane's mother's "Mischief" perfume attracts Hilda, the Wednesday Witch, to Mary Jane's house. The witch pretends to be a cleaning lady, and flies off on her vacuum cleaner James leaving her talking cat behind. Mary Jane gives the cat the name Cinders. When Hilda returns, Mary Jane's mother thinks shes from the vacuum cleaner company and uses James for cleaning, which he doesn't like. Hilda shrinks Cinders with her new magic scissors, but then leaves Cinders behind when she steals Mary Jane's roller skates to get home. Mary Jane finds Cinders inside a new dollhouse sent by an aunt as a late birthday present. She takes Cinders to school and shows her to her friend Marian. On Saturday, Mary Jane and Marian and Cinders take James to the beach for a picnic. Hilda comes back for James, but Mary Janes uses the witch's magic scissors to shrink her. She gets Mary Jane in trouble with her parents for making a mess, and Mary Jane agrees to fly her home to Witch Town, where she looks up the recipe for a magic measuring tape that will make things bigger. Mary Jane and Marian and Cinders help Hilda get the ingredients she needs, and Hilda fixes the real vacuum cleaner, which has also been shrunk. They work together to make a measuring tape, returning Hilda, Cinders, the vacuum cleaner, and some tools to their proper sizes. She takes James, but leaves Mary Jane her skates, which are now able to fold up and to fly!

To Helen, who asked for a witch story.

The Wednesday Witch at Amazon

buy at Book Depository
The Wednesday Witch at Abebooks