No Such Thing as a Witch 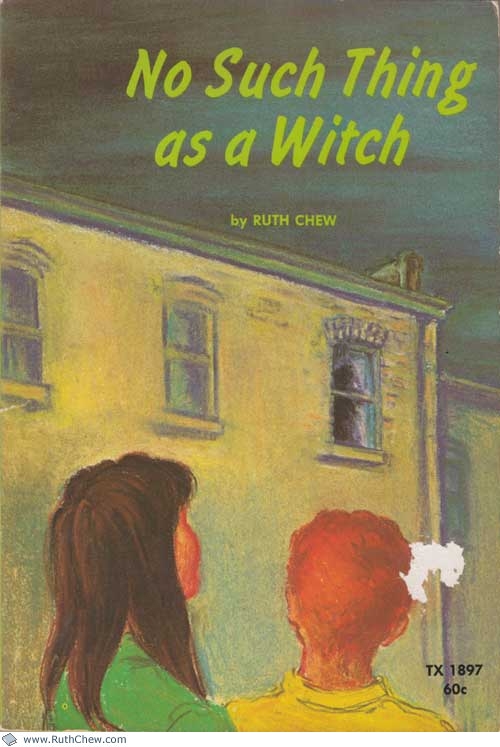 Written and illustrated by Ruth Chew.
First published in 1971 by Scholastic Book Services.

Watch out for Maggie Brown—the new next-door neighbor! And beware of Maggie's homemade fudge! Maggie is NOT an ordinary person. Her fudge is NOT ordinary fudge. One piece of the fudge makes you love animals. If you eat two pieces of fudge you will understand animal language. Three pieces make you act like an animal. And if you eat four pieces… HELP!

When Nora and Tad observe a squirrel reading a little newspaper and their dog behaving strangely, they decide their new neighbor is a witch.

Nora and Tad are given fudge by a neighbor named Maggie Brown who has a lot of pets. After her brother and father start acting strangely, she deduces that one piece of fudge makes you like animals and that two lets you understand what they say. Mrs. Cooper gets angry when Tad and Mr. Cooper start feeding Skipper people food, and Nora goes over to complain to Maggie, who explains that the fudge wears off after a while. Nora and Tad visit Maggie again and pretend to each eat one piece of fudge. They each also take an extra piece. When they get it home, Tad eats two pieces, then three, starts acting a bit like a cat, then takes Nora's, and turns into a cat. Tad steals more fudge while he's a cat, and Nora locks it in a drawer. Maggie takes Nora and Tad to the zoo, where it becomes clear that she is good at taking care of animals, even though Nora had thought she was being mean to her bird. Nora and Tad enjoy spending time with Maggie and her pets, sticking to one piece of fudge per visit. Mrs. Hastings, another neighbor, and Mr. Hellman, a deli owner, are annoyed that Maggie feeds stray cats and keeps a lot of pets. Nora and Tad decide to help Maggie by cleaning up the apartment and hiding the extra animals before the arrival of the health inspector. Nora turns into a mouse and gets the key to the apartment. When Mrs. Hastings and the health inspector visit, Maggie arrives and gives them fudge so that they like her pets, and promises to make more for Mrs. Hastings in the future.

To Maggie Baran who makes the best fudge in the world.

No Such Thing as a Witch at Amazon