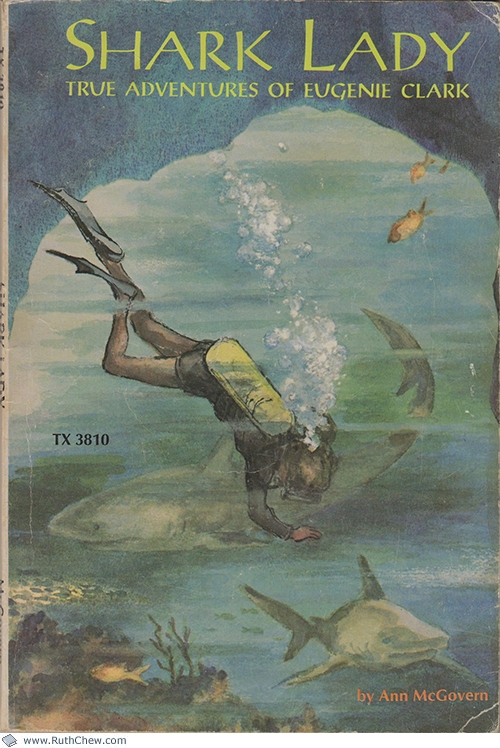 Written by Ann McGovern and illustrated by Ruth Chew. First published in 1978 by Scholastic Book Services.

This is Eugenie Clark, a famous scientist. She has explored the underwater world of many seas. She has dived with many sharks. Once she explored an underwater sharks' cave in Mexico. "There I was," she wrote later, "face to face with one of the sea's most deadly denizens, in the most dangerous situation possible… and I'd never been more thrilled. It was an unforgettable moment in my life."

A biography of the ichthyologist whose interest in fish began at the age of nine during weekly trips to the Aquarium in New York City.

Eugenie first goes to the aquarium to kill time, but discovers that she really likes fish. She goes back many times, and convinces her teacher to bring her class. Her mother eventually buys her an aquarium and fish of her own. She studies animals in college in New York so she can become an icthyologist, but gets into trouble with her grandmother when she brings projects home. After college, she and goes to California to do research, and learns to dive. Then she goes to the South Sea Islands where she learns about poisonous fish and swims with a shark. Then she opens a lab in Florida called the Cape Haze Marine Laboratory and starts to study sharks. She finds out that they can learn simple tasks. Then she goes to Japan to meet the crown prince and gives him a trained shark. Then she takes a job as professor in Maryland, and goes to study "sleeping" sharks in Mexico and Japan. Then she goes to Israel to study a kind of poisonous fish that sharks don't eat. She hopes to keep learning things all her life.

For May Garelick, who led me to the right door. For Barbara and Fred Brenner, whose door opened to a new world. For Marty Scheiner, who is the major person in that world.