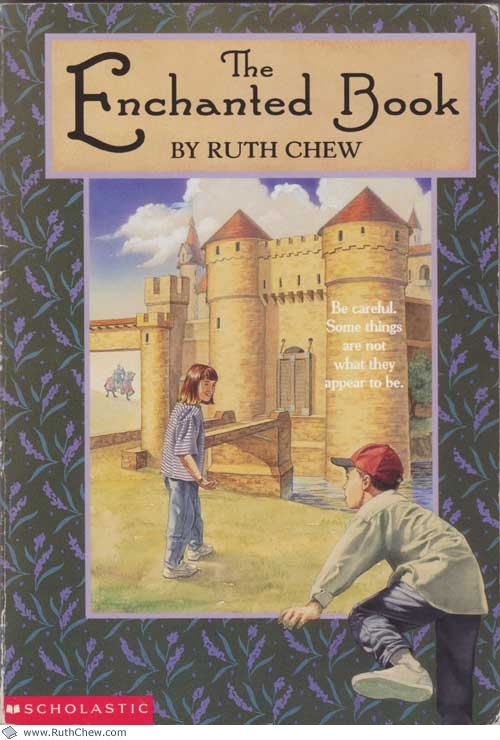 Written and illustrated by Ruth Chew.
First published in 1998 by Scholastic Inc.

The magic words are supposed to make another copy of the King Arthur book. But something goes wrong! Now Serena and Jay are back in the time of castles, knights, dragons, and magic—dangerous magic everywhere!

A mis-cast spell from a magical book sends two children back in time to a land of castles, knights, and dragons.

Jay gives Serena a journal for her birthday. Words appear on its pages by magic the first time she tries to write in it. They find out that the book, which wants to be called "Her Majesty," can do spells, and she helps them clone Serena's new Rollerblades so they can both go to the park and skate. At the park, some teenagers try to take their skates, but they escape using a levitation spell ("Horse and Hattock"). When Jay and Serena try to make a clone of Jay's King Arthur book without Her Majesty's help, they wind up transported into another time and place. They meet a knight named Sir Miles Dubose and a beautiful girl with magic apples that temporarily turn Sir Miles into a donkey and Jay into a puppy. They eat dinner with Brother Donald the hermit under a bridge and help him get his cave back by feeding a dragon one of the magic apples. They meet the Lady of the Lake, who takes them to her luxurious underwater palace, where food tastes like whatever you want, people work happily, and people can do just about anything they want just by thinking about it, even ice skate on marble. The Lady talks about a missing friend who was probably enchanted by Morgan Le Fay. They realize that they don't belong at the palace, so they use the levitation spell to rise up through the lake. They find themselves at the lake in Prospect Park at night and fly home, where Serena who has a magic four-leaf clover, is able to change the book back into a person, the missing fairy Queen Mab.

For Edna of the magic ring.

The Enchanted Book at Amazon

The Enchanted Book at Abebooks