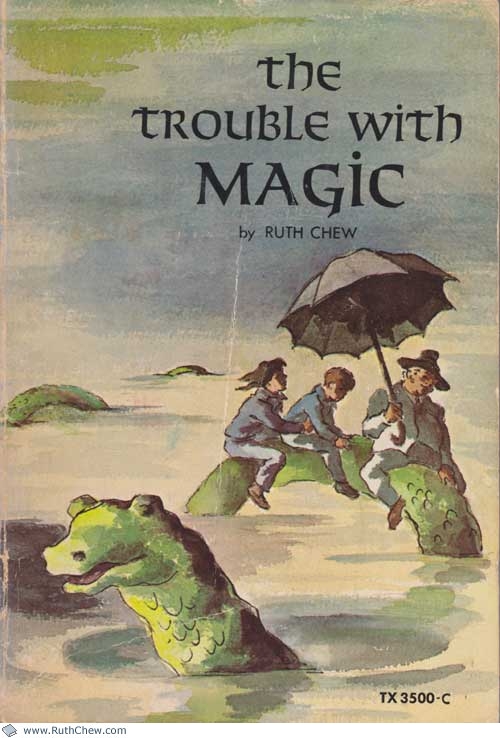 Written and illustrated by Ruth Chew.
First published in 1976 by Scholastic Book Services.

He's short and tubby. He wears a funny hat and carries a magic umbrella. He pals around with a sea serpent named George. He can make the most wonderful magic—sometimes. When the wizard sets up housekeeping in their attic, Barbara and her brother Rick discover that magic can also be a very tricky thing.

Harrison Peabody, a very pleasant wizard, demonstrates that a great deal of trouble often accompanies a little bit of magic.

Barbara and Rick's parents are away and Mrs. Cunningham is taking care of them. After the children buy a bottle of air-freshener, a wizard named Harry emerges from the bottle and causes Barbara's room to grow roses and Rick's room to grow pine trees. The children let him stay in the attic, which he magicks into a cozy room. The next day Harry explains sheepishly that he isn't very powerful because he can only do magic with the umbrella when it's raining, and he has to ask it politely. The next in Prospect Park, Harry and the children ride George the sea serpent. They wish for bathing suits, warm air, and clean water and go swimming, but have to scurry home when the April shower is over. However, Harry dropped his umbrella in the lake, so the children have to go and ask George to help them find it the next day. When they ask the umbrella to take them to the zoo, it lifts them into the air! At the zoo, Rick wishes the animals free just as it stops raining. The zookepers catch George. Mrs. Cunningham takes the children to Coney Island. At the aquarium, they see George in a tank. George complains to the children that he wants to go to the ocean. It starts to rain. Mrs. Cunningham has brought an umbrella; it's Harry's! Barbara wishes for George to go where he wants. Back at home at a magic dinner in the attic, Harry says, "The trouble with magic is that it's terribly hard to handle." The umbrella supplies ice cream for the children without even being asked! Harry changes the attic back to its original appearance and disappears.

To the memory of Rick Foels.

The Trouble with Magic at Amazon