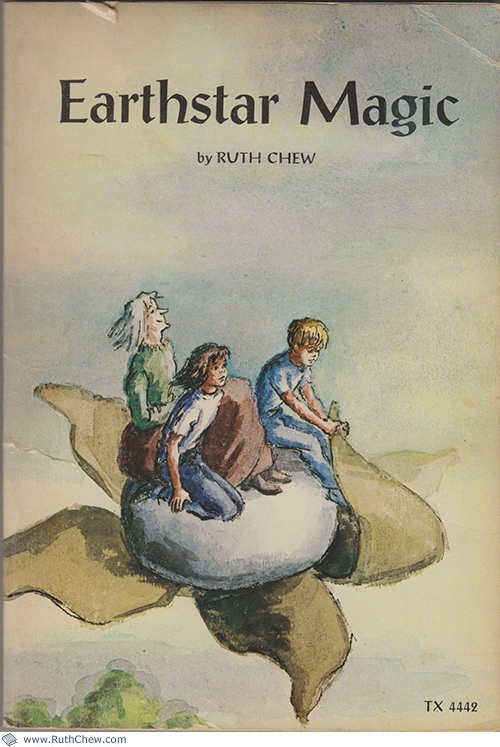 Written and illustrated by Ruth Chew.
First published in 1979 by Scholastic Book Services.

Now that he was on the earthstar, Ben was so excited he forgot everything else. "Show me how you make it fly, Trudy." Trudy took hold of the tip of one point. She pulled it toward her. At once the earthstar flew up into the air. When Trudy moved the point to the right, the earthstar turned right. She pushed it the other way. The star turned left. They were flying!

Ellen and Ben meet a friendly witch who reveals the magic power of the earthstar to them.

Ellen and Ben see a strange woman in the woods. Right where she disappears, they find a frog and a mushroom, which they take home. After the frog and mushroom disappear, they find a woman in a cave, named Trudy, who says the earthstar mushroom, which is magic but unpredictable, turned her into a frog, and that she was recently expelled from the coven by the Head Witch, and her witch's hat and broom were taken away. Later they find the witch and the mushroom at the frog pond. Trudy is tiny and has been using the mushroom to fly aruond. Ben and Ellen wish to be small so they can fly on the earthstar with Trudy. They eat parts of berries that are bigger than they are, and Ben almost gets fed to a baby bird. Ellen almost gets stepped on, but the earthstar changes her back to the right size just in time. Ben returns to normal size too. Ellen finds Trudy and shrinks the witch's hat she bought for her at a rummage sale. Ben and Ellen feed Trudy, who's a vegetarian, bits of cornflake and raisin. They let Trudy stay in a drawer in Ellen's room. During the night, Trudy wakes up Ellen and Ben, complaining that she wants to go to the witch's meeting. She asks for a broom, and changes Ellen and Ben into cats when they ask to go with her. At the meeting, the head witch tries to take one of the cats, but Trudy changes her into a mouse. She decides not to join the coven after all, and changes the head witch back. She returns Ellen and Ben to their normal appearances and returns their broom, encouring them to look for a magic earthstar of their own.

Ellen and Ben Sanders (brother and sister from Brooklyn), Trudy (a witch)

To my mother, Pauline L. Chew.