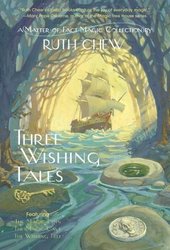 Inside the new copies of No Such Thing as a Witch and What the Witch Left, I saw that there were not one but two e-book omnibuses being promoted.

The second one, which I assume is going to be released with the next two paper-and-ink books in January 2014, is called Three Wishing Tales, and will contain The Wishing Tree, The Magic Coin, and The Magic Cave.